David Leitch is one smooth operator. You can tell by listening to his voice, which is flat and matter of fact; by reading his writing, which is perfectly punctuated; and by studying his face in photographs, which reveals a signature half-smile that’s kind yet controlled. Mostly, though, you can note his calm composition by looking at his résumé, which reads like an American history book, marked by significant people and events that have trained his temperament and tested his resolve. “I feel very blessed to have worked directly with two chief justices, one US president, and a transformative business leader,” says Leitch, 51, who currently serves as group vice president and general counsel for Ford Motor Company, working alongside president and CEO Alan Mulally. “I’ve also had the opportunity to be involved in significant events in our nation’s history, such as the confirmation of supreme court justices, the response to the attacks of 9/11, and helping to restructure a Fortune 10 company during the financial crisis.”

Leitch inherited his levelheaded disposition from his father. “I think the fact that my father was an engineer had a great effect on the way I think and reason,” he says. “My father was very analytical and logical. Interacting with him over the years—observing and absorbing the way he thought and approached problems—had a great impact on me and I think serves me well in my profession.”

His profession—law—was a natural fit. “Every little kid wants to be a Major League Baseball player,” Leitch says. “But once I realized my athletic limitations and got serious about choosing a profession I focused on the law. My mother planted this seed in my head because, she says, I was good at arguing.”

In fact, Leitch began his career as a litigator: After graduating from the University of Virginia School of Law in 1985, he spent two years clerking, first for Judge J. Harvie Wilkinson III at the US Court of Appeals for the Fourth Circuit, then for Chief Justice William H. Rehnquist at the US Supreme Court. In 1987, he was hired as an associate at Hogan & Hartson LLP, where he worked in the firm’s appellate and supreme court practice—led by current Supreme Court Chief Justice John Roberts—arguing cases on subjects such as bankruptcy, energy, copyrights, and patents. After a brief hiatus—during which time he worked as deputy assistant attorney general at the US Department of Justice under President George H.W. Bush—he returned to Hogan & Hartson as counsel in 1993, and partner from 1994 to 2001.

That’s when things really got interesting. In June 2001, Leitch became chief counsel of the Federal Aviation Administration (FAA). Three months later, Sept. 11, 2001 occurred. “Crisis management in an environment where everyone was pulling together to achieve some really meaningful things summarizes my experience in the aftermath of 9/11,” Leitch says. “One of the things I was privileged to work on was trying to get the air-traffic system back up and running after all the planes had been grounded. There were a lot of security concerns and not enough air marshals, and I was able to play a small role [in resolving those issues] and getting the country going again.”

Leitch left the FAA in December 2002 to work in the White House as deputy counsel and deputy assistant to President George W. Bush. A fixture in the West Wing until 2005, he helped the president navigate legal issues associated with the war on terror while also consulting on legislative proposals, advising on ethics matters, and participating in the judicial selection process. “I’ve had some amazing relationships in my career and seen some really talented leaders close up,” Leitch says. “What I learned was: At the end of the day, even people who have a legendary image are still individuals with whom you can have relationships and conversations. I think that—seeing people in leadership positions close up—has given me a sense of comfort in playing the role of general counsel.”

The latest iteration of that role is at Ford Motor, where Leitch has worked since April 2005, first as senior vice president and general counsel and then as group vice president and general counsel, which has been his title since January 2008—less than a year before the economic downturn forced a massive restructuring of the American auto industry. Lucky for Ford, Leitch was up to the challenge. “This industry and this company went through a pretty dramatic crisis in 2008, going into 2009—a crisis of survival, really—and I was able to once again experience people pulling together in a significant way toward a common goal and a shared enterprise,” says Leitch, who oversees a global legal team of 200 attorneys that contributed to Ford’s revival by advising the company on matters of liquidity, risk, and government affairs. Thanks in part to these contributions, Ford was the only one of the “Big Three” automakers to avoid bankruptcy, and the only one to survive the downturn without a government bailout. “I feel a real sense of privilege to have been involved in some of the things I’ve been involved in: to have clerked in the Supreme Court, to have worked in the West Wing, and to have been general counsel at Ford during this critical time. I feel very blessed to have been put in situations that were historical and fascinating and to which I could contribute.”

Now that Ford’s back on top—the company celebrated its third-straight annual profit in 2011, not to mention the second-highest earnings in its 108-year history—Leitch is focused on helping the company continue to prosper. And in so doing, helping the country do the same. “What’s special about practicing law at Ford is the opportunity to contribute to an enterprise that is woven into the fabric of so many communities,” Leitch says. “We touch so many people around the world every day, whether they’re getting into one of our cars, working in one of our assembly plants, or otherwise connected to the enterprise in some way. Our mantra is, ‘Great products, a strong business, and a better world.’ We try to contribute to that every day.” 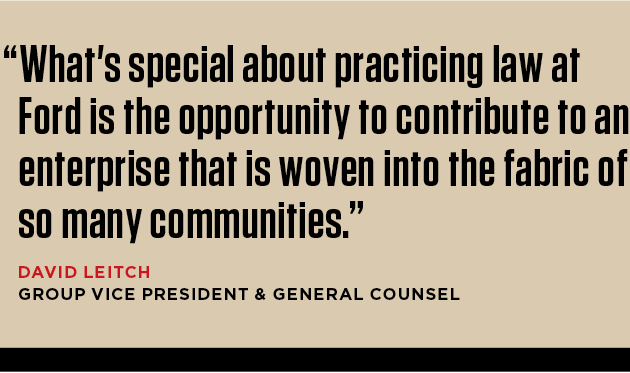 A Vision for Growth