With reusable bags that go from a peach-sized ball to full size in seconds, Flip & Tumble offers a simple, sustainable solution to an everyday problem

Hetal Jariwala was working as a project manager and software developer when she decided her real passion was product design. In 2004, therefore, she packed her husband and moved from Pennsylvania to California, where she enrolled in the Stanford Design Program at Stanford University in 2005. That’s where she met Eva Bauer, a fellow graduate student with whom she later started Flip & Tumble, a product-design firm that describes itself as “taking those pesky, annoying problems, and finding clever, simple, and joyful solutions.”

“During our second year [at Stanford], one of our courses was our thesis,” Jariwala explains. “This was our opportunity to explore just about any problem we felt deserved design exploration. I had been exploring the concept of transformative spaces and Eva had been exploring the concept of play for adults. We got two-thirds of the way through the year and felt like we’d gone as far as we could go in our individual areas. So, we decided to work together.”

A subsequent trip to the grocery store confirmed her suspicions: Interviews with a slew of shoppers revealed that while most people owned reusable shopping bags, almost nobody carried them. “We wanted to do something about this, so we looked into the different solutions on the market,” Jariwala says. They were especially excited by the idea of a “collapsible” bag that could be easily compacted and carried. Existing collapsible bags, however, were cumbersome and hard to compact. “We wanted to find a better way to compact a bag.”The idea for their new project struck while shopping at Ikea. “I remember seeing those big [reusable] blue bags they have there and thinking, ‘I own several of these blue bags, but here I am at the checkout and I don’t have any with me,’” Jariwala says.

They found exactly that when they were experimenting one day in the “Loft,” the space where Stanford design students do their work. “In this space there’s always remnants of various materials lying around, and one of the materials happened to be a stretch material that made compacting the bag significantly easier,” Jariwala recalls. “As we started playing with it, we realized we could compact it into a cute little ball.”

That’s how Flip & Tumble’s first product—a compactible reusable bag called the 24-7 Bag—was born. They hand-sewed their first 50 bags and sold them at local farmers’ markets. People loved them, but the women weren’t yet ready to be business owners. So, the 24-7 Bag was shelved until the latter half of 2007, when Jariwala and Bauer—both of who had since graduated and taken design jobs with other companies—quit their jobs in order to start Flip & Tumble.

The design duo found a local sew shop that made 1,000 24-7 Bags a month, which the women initially sold direct to consumers through their website. Eventually, however, they partnered with a contract manufacturer who found a factory in China that could make more bags more affordably, which allowed the company to scale up and sell wholesale, as well.

Nearly five years later, Flip & Tumble’s reusable bags are sold at gift shops and retail stores worldwide. And they’re just getting started. “We’re now starting to expand our line into other eco home products,” Jariwala says. “Our passion is helping to bring fun, affordable, clever, simple products to the market, so our plan is to continue putting out great products that resonate with our customers.” 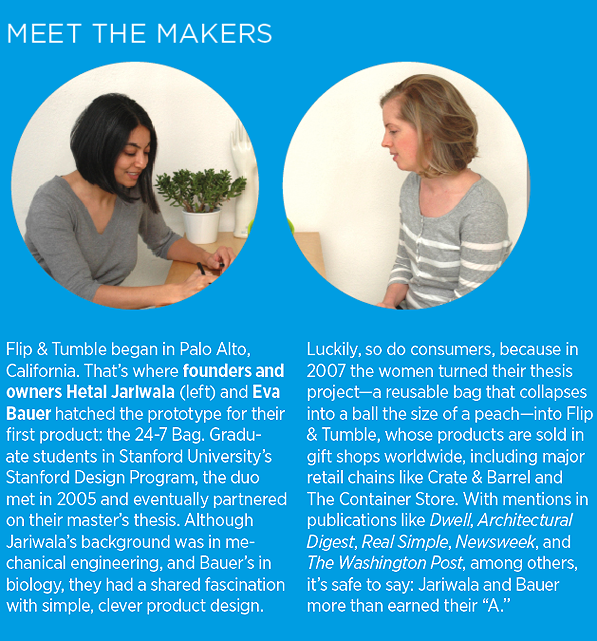 Rebuilding a Brand After Bankruptcy