Fascinated by science but never one to follow formulas, Forrest Krutter views every day of his legal career as an education

Forrest Krutter remembers perfectly his second day at Harvard Law School. It was 1975 and professor Henry Steiner asked his section of 120 first-year law students how many of them had an English degree. “A third of the class raised their hands,” recalls Krutter, 57, who is secretary for Berkshire Hathaway Inc. and senior vice president, general counsel, and secretary for Berkshire Hathaway Group, its subsidiary. “‘How many in history?’ A quarter raised their hands. ‘How many in political science?’ It was down to an eighth. By the time he got to math and science, only three of us raised our hands.”

Like the company he works for—which is famous for its principled approach to business, laid out in its legendary annual reports—it seems Krutter was immune to the persuasive powers of popular opinion. A graduate of the Massachusetts Institute of Technology (MIT), where he got his bachelor’s degree in economics and his master’s degree in civil engineering, he didn’t go to law school because his peers at MIT went. Clearly, they hadn’t. He went because he was interested in law. “When I studied civil engineering, I focused on railroad transportation,” says Krutter, who grew up in Brookline, Massachusetts, and still carries an unmistakable Boston accent. “In the 1970s, when I attended MIT, the railroads in the Northeast had gone into bankruptcy and were going through some significant restructuring. The legal implications for civil engineering were [so] sufficiently great that I wanted to take advantage of that opportunity. Sometimes, a series of great cards are dealt to you, and you just feel like you need to play them.”

Krutter has always been fascinated by science. In fact, his uncle was a physicist who worked at MIT during World War II, where he helped develop microwave radar, and later at NASA, where he contributed to the Mercury, Gemini, and Apollo projects. “Besides my parents, he was the person I most admired, so I very much thought that [science] might be the best course of study and profession,” says Krutter, who discovered that science and law are actually quite compatible. “Being forced to express your views in differential equations, being able to understand probabilistic structures, understanding how outliers work, and knowing how to think about events with a mathematical discipline is a real benefit to the practice of law,” he says.

Upon graduating from law school in 1978, Krutter moved to Omaha, Nebraska, to become anti-trust counsel for Union Pacific Railroad, where he simultaneously fed his appetite for engineering and law while the company attempted to “revive the American railroads.” “I found that opportunity to be exceedingly exciting,” says Krutter, whose voice creaks ever so slightly when he speaks, like the hinges of a squeaky door. “It was rather extreme to move from Boston, where I had lived all my life, to Omaha, Nebraska. Nevertheless, I was young at the time, and when you’re young you take those types of risks.”

Krutter spent eight years at Union Pacific, helping the company adapt to new federal regulations impacting railroads in the early 1980s. He left in 1986 when a trio of acquaintances offered him a job at Berkshire Hathaway Group, which at the time consisted principally of National Indemnity Company—owned by billionaire Warren Buffett’s holding company, Berkshire Hathaway Inc. In the 1990s, Berkshire Hathaway acquired other insurance and reinsurance companies, including General Reinsurance Company and GEICO. “It is impossible to know why I was given the privilege of doing this job,” says Krutter, whose genuine humility—anomalous for someone in his position—is an obvious asset. “But I’m glad I was. I love what I do and I enjoy working with the people around me. They’re fascinating. Every day is an education.”

Although he considers himself a student of his peers—including not only Buffett, but also the members of Berkshire Hathaway’s board of directors, which include the likes of Microsoft chairman Bill Gates, former Yahoo president Susan Decker, and NBCUniversal president and CEO Stephen Burke—Krutter serves as a teacher, mentor, and adviser. Krutter  leads a group of approximately 1,000 attorneys, paralegals, and support staff in his role as senior vice president, general counsel, and secretary for the Berkshire Hathaway Group.

Although Krutter’s two roles are extremely different, they’re also extremely complementary. “Not because of function, but because of principles,” he says. “The Berkshire corporate organization and the insurance group run on the same principles: focusing on what’s economically important and avoiding bureaucracy. So it’s actually very easy to go from one operation to the other.”

Another guiding principle at Berkshire Hathaway is reminiscent of Krutter’s second day at Harvard Law School. “One of Berkshire’s great strengths is that we don’t go with trends,” Krutter says. “It’s tempting to do whatever’s popular at a given time, but we try to operate instead with a very long-term perspective.” And a very long-term staff: In December 2011, Krutter celebrated his 25th anniversary with Berkshire Hathaway—a milestone that no doubt qualifies him to advise the next generation of general counsel. “What I always tell young men and women is: One shouldn’t ask, ‘What will be the next great opportunity in my lifetime?’ What one should start with is, ‘What do I enjoy doing, and what am I good at?’” he says. “You can’t predict when you’re 20 years old what the next 40 years will bring, but you can at least understand what you like and what you’re good at.” 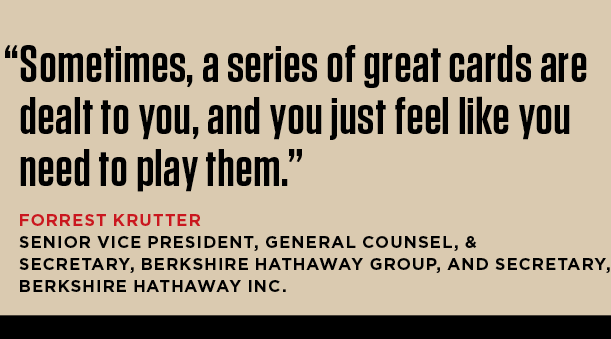