When Gene DeFelice joined Barnes & Noble, Inc. in 2010, the bookseller was at a fork in the road, in the midst of a strategic process that included its potential sale. Thanks in part to the leadership of the board and the executive team that included DeFelice and others, Barnes & Noble decided to stay the course and successfully obtained several major investments from Liberty Media and Microsoft. Since then, DeFelice, who serves as general counsel, vice president, and corporate secretary, has focused his attention on mergers and acquisitions, tax fairness, major litigation, intellectual property, potential international expansion, and assisting his clients in continuing to develop and distribute its award-winning line of NOOK e-readers. That’s to say, the challenges were just beginning. Profile caught up with DeFelice to see what he’s learned along the way.

I started my career in a small litigation boutique. That was great training. When one is involved in the management of major corporate litigation, it’s a valuable experience to have tried cases. But I always had a passion for business, and for that reason wanted to move in-house. After going in-house with Hoffman-La Roche [a Swiss-based pharmaceutical conglomerate], I received successive promotions—ultimately landing in the business side at the company headquarters in Switzerland, in charge of an international sales team and marketing. The operational experience, as a recipient of legal services, reinforced the need to provide practical legal advice, maintain deal momentum, and understand that the proper legal role is to facilitate business objectives.

I came to Barnes & Noble in the middle of the board’s strategic process to determine the company’s future. This included a tremendous amount of legal time and effort, as I partnered with the board and the executive team on this process. Ultimately, this culminated in an investment by Liberty Media in excess of $200 million. This year [2012], Microsoft agreed to make a $605 million investment in a digital subsidiary we are establishing. Part of that deal included the settlement of significant patent-litigation brought by Microsoft. These matters have been complex. But this is the army I joined, and I’m not shy with respect to challenging situations—in fact, I love them.

A lot of people like to say that bookstores are in a precarious position. I love a bookstore, love browsing, love holding a physical book, flipping pages, writing in the margins, and even sometimes judging a book by its cover. We’ve always been a great bookstore and are now the number-one bookstore in the world. With Borders going out of business and the market having consolidated, I think we are in a fantastic position.

Of course there are challenges, but there’s also a romance associated with books that didn’t exist with VHS or Beta tapes. There are a lot of people that feel just like I do about bookstores and books. When I was dating my wife, 21 years ago, we used to go on dates to Barnes & Noble. Not to be a contrarian, but I think there will always be a desire for books. 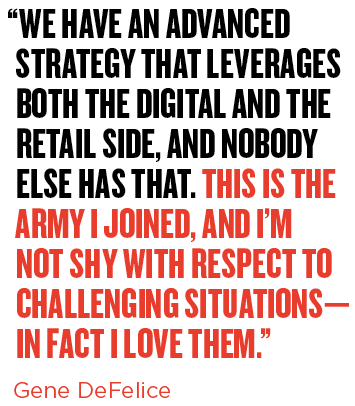 One other area where we have had significant success has been in the tax-fairness issue. I’ve been personally spearheading that issue for Barnes & Noble, and we have worked hard, together with other retailers, to level the playing field, in terms of treating a retail sale the same as an Internet sale for purposes of state-sales taxation. Amazon initially opposed this effort, but after we achieved significant successes in California and other states, they stopped fighting and agreed to support such efforts. With a number of states already enacting such legislation, it is only a matter of time before the playing field has been leveled on a national level.

One challenge for us right now is the government’s attempted shake-up of the agency model. The agency model refers to a selling model where book retailers act as agents of publishers, publishers set the price, and retailers receive a percentage of the sale price, such as 30 percent. Amazon used to have a 90 percent share of the market. But publishers individually negotiated agency agreements with various retailers that resulted in a reduction of that share to 60 percent.

It increased competition and brought consumer prices down. But the Department of Justice [DOJ] has pursued a lawsuit against Apple and five publishers—not Barnes & Noble—claiming that Apple and the five publishers colluded in their own agreements, and some of the publishers have settled. Part of that settlement, unfortunately, is that the publishers will terminate their agency agreements with Barnes & Noble and all the independent booksellers that are small businesses around the United States. These were individually negotiated agreements, and now there’s a chance that consumer choice will be eroded and prices will go up.

The DOJ is inappropriately trying to regulate companies that have done nothing wrong. The DOJ should not become de facto booksellers by trying to regulate an entire industry, and they shouldn’t meddle with independently negotiated agreements where the DOJ acknowledges there was no collusion or illegal conduct. That’s not the appropriate role of the government.

Some of the other companies have chosen to settle, because it’s easier and less expensive—and, frankly, the DOJ did not ask them to pay anything to settle the “cost” to the supposed wrongdoers. When the government pits its massive resources against companies like the settling publishers, it’s very difficult. Such massively imbalanced resources and the inappropriate leverage that confers on government is a statement about where this country has come. We’re not in a good place when the government can overpower innocent third parties like these publishers, and, frankly, if these publishers were not innocent, then the government should be seeking redress specifically from them, rather than interfering in the contracts between them and Barnes & Noble.

I have no crystal ball, but I’m hopeful that Apple and the other publishers will stay involved. From my perspective, the DOJ’s complaint appears flimsy.

We also have to focus forward, and there are some incredibly exciting developments happening. Barnes & Noble has the best e-readers available. I don’t make the technology decisions, but to work for a company that has the best people, stores, and products—it’s really an electrifying place to be.

Our operations have tens of thousands of employees—we’re all booksellers. And we’re turning ourselves into tens of thousands of NOOK sellers as well. There are plenty of cross-selling incentives. Fifty Shades of Grey, for instance, is promoted in stores, and it’s a hot digital seller. It’s an excellent example of how we’re capitalizing in both the retail and digital spaces. We’ve worked hard to break down the barriers between the two.

Barnes & Noble has pivoted from its retail roots to develop and implement a sophisticated digital strategy. We are really the only bookseller to achieve this. We have a Reading Innovation Laboratory in Palo Alto, California, that has hundreds of tech gurus. When I go there, I am just infused with excitement about our team: They’re brilliant. Our NOOK product road map is confidential of course, but since I’ve been here, we’ve launched Color, Simple Touch, Tablet, and Owl—our GlowLight version. That’s four cutting-edge, best-in-breed e-readers. And there are no signs of slowing down our innovations.