Started by Pakistani immigrant Michael Chowdry in 1993, Atlas Air Worldwide Holdings, Inc. has primarily operated freighters since its inception. In an economy that is tough for most companies, Atlas Air has emerged as a true global competitor with the addition of passenger planes in 2011. Boasting an annual revenue of $1.3 billion, the company is a strong competitor in its industry with offices in numerous cities around the world to support its worldwide service to six continents. Although it has posed new challenges, human resources vice president Joe Kelley shares how the new line took flight.

How did your prior military experience prepare you for your current role as vice president of human resources?

It was a complete understanding of the technical and military culture, which is helpful for a large military contractor like Atlas. The Air Force life taught me about diversity, structure and teamwork for a common goal; specifically my tours in Saudi Arabia during Desert Storm and Desert Shield.

What is the company’s niche market?

Atlas Air Worldwide Holdings includes Atlas Air, Polar Air Cargo, and Titan Aviation Leasing. We operate the world’s largest fleet of Boeing 747 freighters on a wet lease and charter basis for some of the world’s leading airlines. In 2010, we served 250 destinations in more than 90 countries on six continents. We’re also a leading provider of chartered commercial and military airlift for customers around the world. Atlas Air freighters carry such cargo as high-tech goods, pharmaceuticals, aircraft parts, fresh produce, livestock, automotive parts, capital equipment, and other time-sensitive goods. On the passenger side, we operate Boeing 747 and 767 passenger aircraft for charter flights, primarily serving the US military. We also operate a service on behalf of SonAir for flights from Houston to Angola to support the energy industry. Additionally, we provide related aviation services, including flight-crew training for pilots selected to fly Air Force One and the E-4B National Airborne Operations Center, and aircraft leasing. 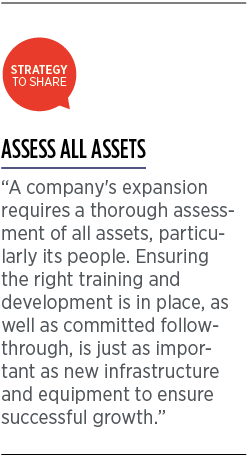 How is your role vital to successfully bringing on additional markets?

The preparation by human resources is key to the organization. HR management must consider the staffing needs of a larger organization with a deeper infrastructure to support the growth, particularly if the markets are outside of the normal company operations. The expansion of an infrastructure also requires an assessment of current personnel’s skill levels to determine if additional expertise is needed. Our technical and flight operations departments had to prepare for a new airframe to join our fleet as well as all certifications and training needed to operate the new aircraft. In HR, we shifted our focus to hiring individuals that had experience and knowledge of passenger operations and the Boeing 767 aircraft. Many of our employees had to complete comprehensive training programs to launch this passenger service as outlined over an aggressive timeline, including pilot and flight attendant training, and maintenance and operational training.

In a tough economy, how was the company able to move forward with the passenger plane line?

Branching into passenger service was a natural with our nearly 20-year history of safety and global reach. Unlike scheduled airlines, we’re able to move forward with this because we’re filling a niche—premium service to Angola, for example, or the ability to serve the military with passenger-configured aircraft. Customers have trusted us to move cargo around the world, so passengers are the next logical move. Because we’re not a commercial airline in the sense that we’re selling tickets on a scheduled network, we’re able to take advantage of market opportunities that are less reliant on a stronger economy.

What does this mean in respect to additional jobs and opportunities?

The expansion into passenger service means a great deal to the company. In 2011, Atlas hired over 250 new employees including crewmembers and ground staff. For a company to sustain growth like this in these difficult economic times, it really shows the type of vision and commitment that has been put forward; not only in leadership but the entire Atlas team. The company has even more growth potential and we expect 2012 to be as promising.