When Rich Lancaster came to AccuData, the company was still recovering from the credit meltdown. The CEO had turned companies around before, but could he save the direct-mail industry from extinction?

When he arrived at AccuDataIntegrated Marketing, Rich Lancaster could see patches of a bright future through a lens fogged by business challenges. Internal processes at the company needed alignment. Sales and marketing were chugging along, but not optimized. And, most urgently, the digital opportunity that demands every mail marketer’s attention was still waiting to be seized.

British-born Lancaster—a seasoned data exec—boasts a keen interest in technology and a penchant for fixing things, particularly companies. AccuData was a fixer-upper’s dream, and Lancaster was up for the challenge.

Upon entering AccuData, Lancaster saw several things in the company’s favor. Even though the industry is rocked continuously with economic issues, mergers, and constant change, AccuData’s internal culture remained surprisingly resilient. “The people are fantastic, a lot of them have been together 10–12 years,” Lancaster says. “It’s a very tight group. We know how to work hard and have a lot of laughs.”

Knowing that one can count on the crew is no small detail when trying to turn a ship around and reset its course. Lancaster was assured by his interactions with employees that the overall spirit of the company would help it sail into the future.

Another advantage was an amazing customer base. “One of the things you evaluate when looking at an acquisition of this size—you want a vibrant, satisfied customer base—and ours is first class,” Lancaster says. Further, AccuData boasted strong relationships with its vendors and suppliers.

Lancaster is the ideal change agent, and has always found a home in the data industry, whether in the United Kingdom, the United States, or Australia. After bringing the “greenest” commercial printer in the Pacific Northwest to profitability, Lancaster joined Compact Information Systems, a leading database aggregator, in 2009.

In August 2011, Compact Information Systems purchased AccuData, installing Lancaster at its helm. “AccuData was bought by Compact because AccuData is the country’s largest data reseller,” Lancaster says. “Compact was already an expert in the data reseller channel, so AccuData was a great way to grow both companies simultaneously through various synergies and efficiencies.” 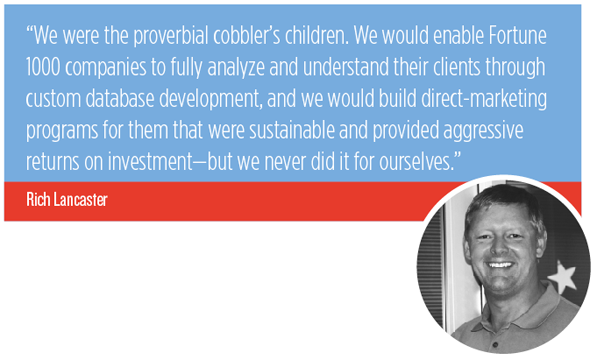 AccuData had put its hometown of Fort Myers, Florida, on the map as the Mecca for marketing lists. But in the mid-2000s, the financial industry collapsed, inadvertently pulling many related industries down with it. “There was too much dependence on the credit-based market segment,” Lancaster explains. “When solicitations ceased for credit cards, new cars, and other finance-related market segments, AccuData lost a significant portion of its business. As a result, the firm’s staff was reduced nearly in half.”

In the aftermath of the downturn, private equity ownership swooped in to oversee AccuData directly, followed several years later by the bank’s management consultants. Under outside management, AccuData began to stabilize but was unable to return to growth in a very difficult marketplace, and profitability was almost nonexistent.

Lancaster, then Compact’s CEO, was asked to assume AccuData’s helm. What he encountered was a company with great potential, but in need of an adjusted internal landscape.  For one, there was no real sales-force automation.

“We were the proverbial cobbler’s children,” Lancaster recalls. “We would enable Fortune 1000 companies, through our Integrated Group in our Clearwater office, to fully analyze and understand their clients through custom database development, and we would build direct-marketing programs for them that were sustainable and provided aggressive returns on investment—but we never did it for ourselves.”

In addition, AccuData was operating on a patchwork of internal systems that had been hand-built over the decades. These systems were a drag on internal innovation and needed to be overhauled. Further, given that AccuData was an accumulation of prior acquisitions, the HR department was operating three disparate health and 401K plans for different groups of employees across the United States. Over the past year these have all been consolidated.

The largest opportunity for AccuData was in the digital realm. For 25 years, the company has primarily serviced the direct-mail industry, doing the same thing in more or less the same way, Lancaster says. While direct mail as a business hasn’t returned to its peak of the mid-2000s, Lancaster says the past two years have seen a healthy return. “Because it’s so big, we have always thought we can happily reside within this [direct-mail] channel,” Lancaster explains. “But now it is time to begin the shift to sell within digital direct-marketing channels. That’s the challenge in terms of focus and redirection.”

Since assuming his role at AccuData, Lancaster’s primary goal has been to increase profitability and efficiency. “We’re trying to offer the most number of national files, growing our data set and pushing the envelope in technology on behalf of our customers, getting more into the digital world,” Lancaster says.

First on the agenda was to enable customer profiling. With the integration of Salesforce, a customer relationship management software, in April 2012, AccuData is now able to better target its services. “You would think that a database-marketing company would have mastered its own internal infrastructure, procedures and policies, and workflows,” Lancaster says. “But the company has been so busy doing it for other people, it never took the time to focus on doing it for itself.”

To integrate billing with the online platform where customers buy their data, AccuData is about to complete it’s integration of Microsoft Dynamics. “When we finally have our accounting system fully integrated, we will have sales, marketing, accounting, production, and nearly all other areas of the company operating from one set of off-the-shelf solutions that are easy to understand and to customize going forward,” Lancaster says. With all these operational changes, the inner workings of the business are poised to support the outward-facing initiatives.

In March 2012, Lancaster oversaw the purchase of DaVinci Marketing Technologies. The acquisition offered AccuData soup-to-nuts execution in a cloud-based platform, with the ability to manage direct-mail campaigns, e-mail campaigns, and social media display advertising or “like” campaigns. Development is underway for mobile marketing directly to consumers’ smartphones, offering clients an ROI analysis back within the same platform.

With all the change underway, it’s hectic at AccuData. But the future looks bright, and the enthusiasm is contagious. Philanthropic activities are at an all-time high. Whether it’s a food drive, a walk/run for the Make a Wish Foundation, or volunteering on a home build with Habitat for Humanity, the staff is ready to serve. “We work hard, play hard, and help the community,” Lancaster says. With that philosophy—and Lancaster’s efforts to modernize AccuData—how can the company go wrong?